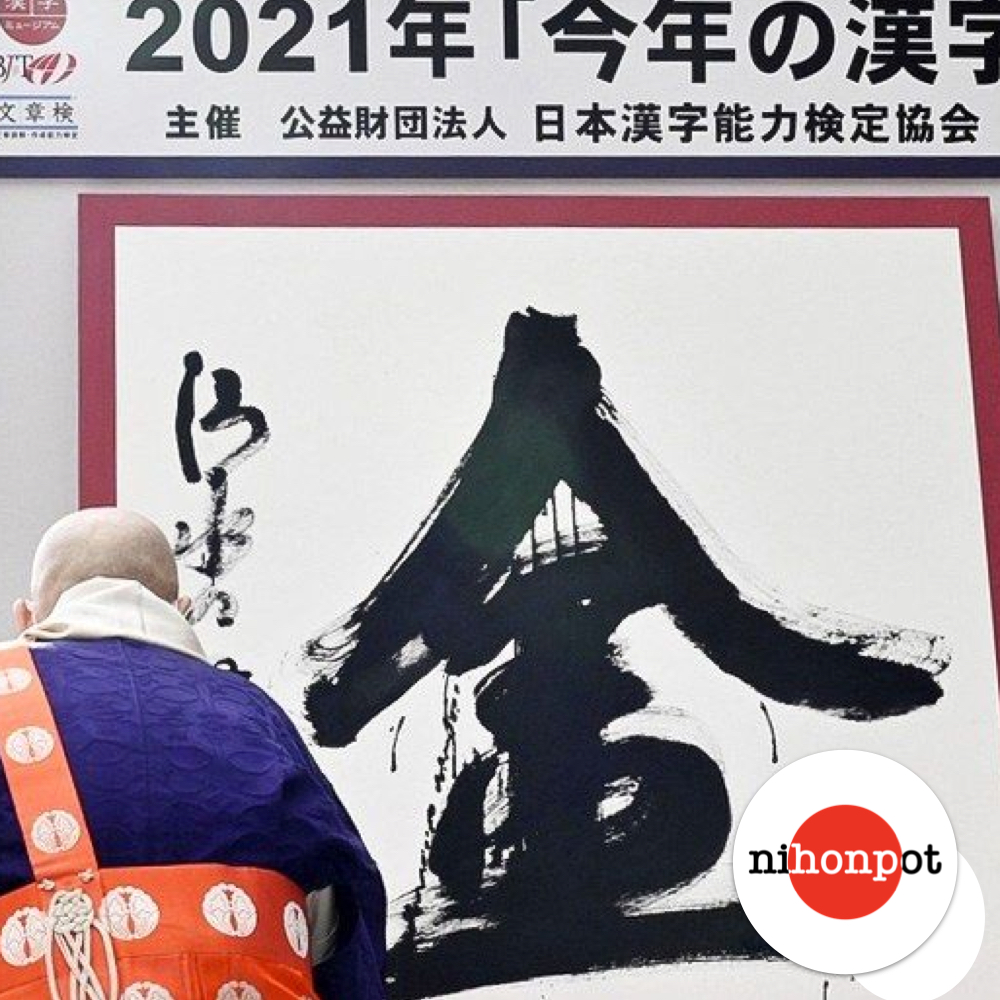 Just as every year, the Japanese Foundation for Kanji Aptitude (KANKEN) announced the kanji that best describes current year. This 2021, they choose 金 (きん / kin), which translates as “gold” or “money”.

As you can see on Kanken’s oficial tweet, this decision became official at Kiyomizudera Temple when Seihan Mori (the chief abbot) wrote the character in an official ceremony this past Monday (Japan time). You can see the exact moment below:

According to the Kanken’s official website, this decision was inspired by tree main reasons:

This ceremony has been celebrated since 1995 due to a particularly special reason. Do you want to know more? Keep reading!

Perhaps you are thinking: what’s actually a kanji? To put it simple, it is a character used in Japanese language to represent ideas. Despite them being created in China, they have been used in Japan for at least 1500 years. These characters are used on the day-to-day writing in order to ease written language’s comprehension.

But why to choose a kanji of the year? It all began back in 1995’s January 17th when the Kobe region experienced one of the most devastating earthquakes ever registered. We are talking about the Great Earthquake of Hanshin, which costed more than 140k lives and currently holds the “most costly natural disaster” title on the Guinness book of Records.

In December, the Japanese Foundation for Kanji Aptitude decided to commemorate this incident. This is how in December 12th they choose 震 (しん / shin / earthquake) as the kanji of the year, setting up a tradition that still remains today. This is why every year on December 12th Japan celebrates “the kanji day”, which is also the date when Kanken chooses the kanji that better represents the happenings of the entire year. This ceremony is held in Kiyomizu Temple, which is considered to be one of Kyoto’s most sacred places for Buddhism.

How is the kanji of the year chosen?

Kanken association receives votes all year long in order to select the Kanji of the year. People can vote in aproved libraries, send their votes through mail and even do it online. However, it is Kanken association themselves who issue the final outcome.

Despite December 12th is the official date for Kanken to release the Kanji of the year, lately this ceremony has gained a lot of popularity amongst locals and tourists. This is why the date could vary if December 12th is a weekend day, so they can avoid any complications that may delay the ceremony.

An interesting fact about Kanji of the Year is that it can in fact be repeated, as it depends of each year’s receibed votes. For instance, this year’s kanji was 2000, 2012 and 2016’s as well. It is actually the most repeated kanji of the year, followed by 災 (わざわ / wazawa) which translates as “disaster”.

What were this years options for kanji of the year?

This year, Kanken reported a whopping 223,773 votes. The “gold”/”money” kanji obtained the most votes, but at least 20 other characters where considered as options. You can check the TOP10 below, their meanings and how much votes they obtained:

Just for you to know, each one of this characters has at least 2 ways to be read. Here we share just one, but their sound and pronunciation could vary depending on their context.